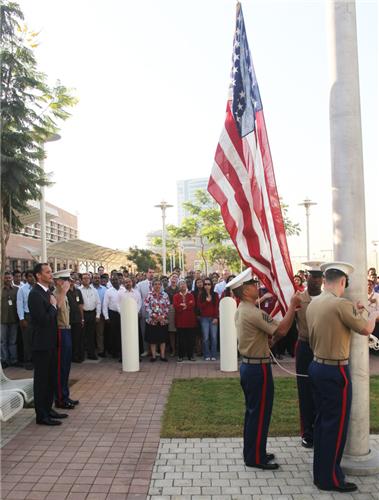 Through an embassy, countries can reach resolutions to problems ranging from trade tariffs to political tensions before they escalate. Three primary types of staff can be found in an embassy, along with administrative support staff.
Consular officers deal with things like issuing visas and handling issues which arise for travelers while they are abroad.
Political officers are responsible for following the political climate in the host nation and issuing reports to their home government. Economic officers handle economic negotiations such as disputes over taxes, tariffs, and patent negotiations. Together, the staff of the embassy is headed by an ambassador.
A diplomatic mission is a group of people from one state or an international inter-governmental organization (such as the United Nations) present in another state to represent the sending state/organization officially in the receiving state.
It practice, a diplomatic mission usually denotes the resident mission, namely the office of a country's diplomatic representatives in the capital city of another country.  As well as being a diplomatic mission to the country in which it is situated, it may also be a non-resident permanent mission to one or more other countries. There are thus resident and non-resident embassies.

History of US Embassy

The Consulate General of the United States in Mumbai represents the interests of the U.S. government in Mumbai, India and nearby surrounding areas. The consulate was established in 1838. In 1843, President Martin Van Buren issued a commission dated 5 October 1838 to Philemon S. Parker, of New York, as consul.
At times during the 19th and early 20th centuries, a consular agency at Karachi was under its jurisdiction. Effective 1 July 1945, it was raised to a Consulate General, with Consul General Howard Donovan as the principal officer. The consulate functioned from Wankaner House, later renamed Lincoln House, located at Breach Candy in south Mumbai since 1950 (The consular residence was Washington House on Alt amount Road).
The building, declared as a heritage site, is an erstwhile palace of Maharaja Vakaner. The palace was handed over to the U.S. consulate by the Maharaja to raise funds to payoff his taxes, after India became independent. In 2002, the consulate decided shifted its office to northern suburbs owing to security reasons. Since 21 November 2011, all sections of the U.S. Consulate General Mumbai are located at a new facility in Bandra Kurla Complex.In 2012, the U.S. Commercial Service Trade Information Centre was inaugurated at the Consulate General.

Extra Territoriality at US Embassy

Contrary to popular belief, diplomatic missions do not enjoy full extraterritorial status and are not sovereign territory of the represented state. Rather the premises of diplomatic missions remain under the jurisdiction of the host state while being afforded special privileges (such as immunity from most local laws) by the Vienna Convention on Diplomatic Relations.

Diplomats themselves still retain full diplomatic immunity, and (as an adherent to the Vienna Convention) the host country may not enter the premises of the mission without permission of the represented country. The term "extraterritoriality" is often applied to diplomatic missions, but only in this broader sense.

As the host country may not enter the representing country's embassy without permission, embassies are sometimes used by refugees escaping from either the host country or a third country.  For example, North Korean nationals, who would be arrested and deported from China upon discovery, have sought sanctuary at various third-country embassies in China.
Once inside the embassy, diplomatic channels can be used to solve the issue and send the refugees to another country. See List of people who took refuge in a diplomatic mission for a list of some notable cases.

Multiple Missions of  the US Embassy