Here are some highly visited temples in Mumbai, and are visited by devotees specially during important festivals.

The Mumba Devi temple is situated in Zaveri Bazaar, in Mumbai and is the” kul- devi”, of the original residents of Mumbai, and is believed to give always blessings and good luck.  This is the oldest temple in Mumbai. Mumbai derives its name from the Sanskrit language, Maha – Amba, meaning Great Mother. If you add “ai”, to Mumbai, it becomes “mother”, in the Marathi language.
This temple is dedicated to Goddess Mumba, the local incarnation of the Devi, and is the Patron Goddess, of the Kolis ( fishermen community of Maharastra ).  The Goddess Mumba Devi is dressed in a robe with a silver crown, a nose stud and a golden necklace. To the left is the stone figure of Annapurna, seated on a peacock, while in front of the shrine is a tiger, the carrier of the Goddess.

Every face of Sri Panchamukha Hanuman has a significance –
The Hayagriva faces the sky. It is shown above Hanuman’s face. Hayagriva gives knowledge and good children. Hindus consider Hanuman to be the 11th Rudra avatar of Lord Shiva and He is the spiritual son of Vayu Deva, the Hindu deity of the wind.
Many Hindus pray to Lord Hanuman, to be delivered from the bad effects of Saturn, which in Hindu astrology, produces bad effects of one’s life, when one is afflicted with the planet “Saturn’. Lord Panchamukha Anjayneya Swami, is the main deity of Sri Raghavendra Swami. The place where he meditated on this 5 faced form of Hanuman, is now known as Panchamukhi, where a temple for him has been built.

This temple is situated on the Mumbai – Pune railway line, and is 36 miles by train and 43 miles by road from Mumbai city. Ambarnath means,” Lord of the sky”. This temple is on the bank of the Vadavar river, and is carved out of stone. King Chittiraja, belonging to the “Shilahara dynasty”, constructed this temple, in the 11th century.


This temple is dedicated to “Lord Shiva” and in the main room ,“Gabhara” there is a “ Shivling” in the center of the room. The temple is crowded during ,“Maha- Shivratri” and there is a fair conducted here for 3 days during the festival. Ambarnath temple, stands out exclusively for it’s “Vesara” style of Architecture, which is a combination of the Dravidian school and the Nagara school of architecture.
The Ambarnath temple is embellished with bold features and sculptures from Hindu mythology and has got a steep pyramid structure that forms the roof.

This is a famous, “Shiva temple” located in Alibaug, a coastal township, South-East of Mumbai. It is 13 kms from Alibaug on the way to Rewas. This temple is located on a 900 feet high hill. To get to the temple one has to climb a flight of 5,000 steps.
Besides the temple is the Pushkara kund. It is a complex of temples beginning with a Hanuman temple and a Ganesh temple and many small Shiva temples. It is popular with devotees during the “Shivratri festival”. The temple has a Dharamshala also, if the devotees wish to spend the night over there. Kanakeshwar, is made up of two Sanskrit words namely, Kanak and Ishwar which means “God of Gold”.

This temple is also known as the Baan Ganga temple, and is dedicated to Lord Shiva. This temple is located in the North – West end of the Marine drive loop in South Mumbai.
The  temple and the water tank  was built in 1127 AD, by  Lakshman Prabhu, a Goud Saraswat Brahmin minister, in the court of the “Silhara dynasty kings”, who ruled Thane and the islands of Mumbai from 810 AD to 1240 AD.  Walkeshwar takes its name after Lord Shiva. Valuka – Ishwar is taken from the Sanskrit language meaning,”an idol made of sand’.
Legend has  it, that Ram paused at that spot, on his way from Ayodhya to Lanka, in pursuit of the demon king Ravana, who had kidnapped his wife Sita. Then Lord Ram was advised to worship a Shiv linga. So Ram constructed a sand linga and worshiped Shiva there. The temple is busy during the full moon and the new moon. It is currently the site of an,” Annual Hindustan Classical Music Festival”, conducted by the “Maharashtra Tourism Development Authority”, in the month of February.

This is a Shiva temple, located in Greater Mumbai, near the “Sagargad Fort”. Once you reach Alibaug, you have to head to Khandale village, about 10 minutes drive from Alibaug Town.

This temple is located 7 kms away from Mumbai city and is located in Sangam Mahuli, and the temple affairs are managed by the “ Royal family of Satara”. Someshwar temple, is dedicated to Lord Mahadeva, and is situated on the banks of the river Godavari. Besides Shiva, the temple is the abode of Lord Hanuman also.  This temple was originally built by, Rajmata Sagunabaisaheb, Queen of Chatrapati Shahajiraje Bhosale in 1874 AD.
Temple Timings – Morning till Evening.

This temple was built in 1735 AD by Shripatrao Pant Pratinidhi, a minister in the court of Chatrapati Sahu Maharaj. This temple is dedicated to “Lord Shiva”, and has got impressive architecture and is in Sangam Mahuli. The walls in the passage way have idols of Ganesh and Parvati.

This temple is located near Marine Lines in Mumbai, and is dedicated to”Lord Shiva”. This temple was originally built in the 12th century by Raja Bhimdev. This temple is situated 1000 feet, above sea level and overlooks the Arabian sea. When you enter this temple, it gives you an illusion of Mount Kailash, the eternal home of Lord Shiva.
Each year millions of devotees come to worship Lord Shiva. In the year 1900, a tall spire was added to the temple.

This temple is situated 200 kilometers from Mumbai. “Bhimashankar Temple” is a prominent “Shiva temple”, and is one of the” 3 jyothirlingas”, in Maharashtra. It is located in the forests of “Sahyadri”, in Pune district. This place is the origin of the river Bhima.
This temple is built in “Nagara style” of architecture, and you can find a Roman styled bell in front of the temple, which was presented by Chimaji Appa, the younger brother of Bajirao Peshwa.

Trimbakeshwar temple is located 180 kilometers away from Mumbai and the nearest rail head is Nashik, which is 284 kilometers away from Trimbakeshwar. It is one of the “12 jyothirlingas of Shiva”. The temple is located at the source of river Godavari and was built by Nanasaheb Peshwa.
The unique feature of the “Shivling”, in this temple is that it has got, 3 faces symbolizing Brahma, Vishnu and Mahesh in a shallow pit. If you want to spend the night there the temple priests arrange food and lodging for the devotees.

Ramkrishna Math in Mumbai is one of the oldest centres of the order. It provides solace, to individuals who seek inner peace and serves the needy in Mumbai. Srimat Swami Shivanandji, a direct disciple of Shri Ramakrishna, laid the foundation stone on 6th February 1925, at Khar. It now contains the “ Holy Mother’s” temple.


The temple at Mumbai has a large congregational space and an internal parikrama around the “Sanotum Sanctorum”. The idol of “Shri Ramakrishna”, etched in marble is seated on a full bloom lotus facing the east direction and is flanked by images of Swami Vivekananda and the Holy Mother.

The Founder of the ISKON temple was Acharya A.C Bhaktivedanta Swami.” ISKON” stands for “International Society for Krishna Consciousness”. The Krishna temple, is in Juhu, Mumbai and ( ISKON ) is a stone’s throw away from the Juhu beach. The presiding deities at the temple are  Sri Gauri- Nitai, Sri Radha Rasabihari, Sri Sita, Sri Ram, Laxman and Hanuman. 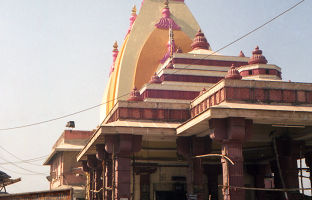 This temple is located on Bhilabhai Desai Road, Mumbai and is a famous temple of “Mahalakshmi”This temple was constructed in 1785 AD.The idols of Goddess Maha- Kali and Maha - Saraswati are also enshrined in this temple.
Sri Maha- Lakshmi is the “Hindu Goddess of Wealth”, and there is a huge rush of devotees during the “Navratras”. Mostly the Gujarati community ,comes to this temple during Diwali, when they perform the “Chopda puja”.

This temple is located in the Bhuleshwar area, of Mumbai and is the oldest Swaminaryan Temple. The present temple has a tri – spire structure and the idols installed in the temple are that of Laxminaryan Dev, Ghayshyam Maharaj, Hari Krishna Maharaj, Goulokvihari and Radha.


This temple was built by,” Acharya Laxmi-prasad Maharaj” in 1903 AD. The temple has,25 steps leading to the audience hall (sabha- mandap). There are shrines dedicated to Ganesha and Hanuman.
There are 3 main shrines. On the East side, there are idols of Hari Krishna Maharaj, Gaulovihari and Radha; the shrine at the Centre, has the idols of Ghanashyam Maharaj, Naryana and Lakshmi; while the shrine on the West side, houses the resting places for the deities.
Also Read: Jain Temples in Mumbai | Bhimashankar Temple | Iskcon Temple | Mahalakshami Temple | Siddhivinayak Temple | Swaminarayana Temple | Balaji Temple in Mumbai | Trimbakeshwar Temple


Explore more about History of Mumbai