Story Behind The Name Mumbai

‘Mumbai’ was sourced from the two words ‘Mumba’, a kind of abbreviation for ‘Maha-Amba’ – who is the principal goddess of the Koli tribe of Maharashtra – and ‘Aai’ which, in the Marathi language, signifies mother.
Most of us are well aware of this, but what we do not really know about the name ‘Mumbai’ is what follows in this article. 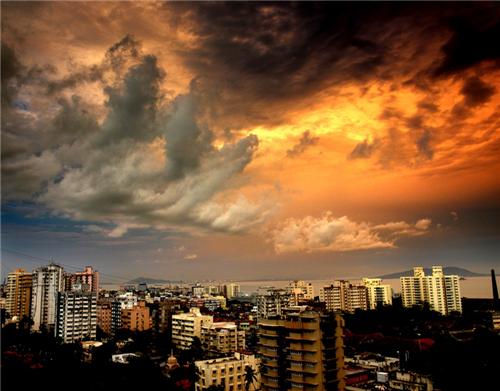 Here is a compilation of the various names that Mumbai had, during the earliest stages of its evolution.
1507 – Mirat-i-Ahemdi, a piece of literature, produced during the reign of Ali Muhammad Khan in Delhi, provided the earliest documented name of the city – in this text, the city was referred to as ‘Manbai’. ‘Kakamuchee’ and ‘Galajunkja’ were often locally used as names for the city, before Mirat-i-Ahmedi provided an official one.
1508 – This period of time roughly coincided with the advent of the Portuguese in India, with commercial motives in mind. Mumbai, a port city, became their top preference in India and many Portuguese writers found valuable interest in writing on the various aspects of the city.
It was in one of those famous Portuguese writings, which were produced then – Gasper Correia’s book ‘Legends of India’ – that the city was given the  new name of ‘Bombaim’ – sourced from an ancient Portuguese phrase ‘Bom baim’, which literally anointed the city with the status of a ‘good little bay’, primarily owing to its excellent port facilities.
1516 – A new name ‘Tana- Maiambu’ emerged from the vocabulary of a legendary Portuguese explorer Duarte Barbosa, who probably wanted to combine in this name the two words – Thane and Mumba-Devi (Tana was used to refer to Thane).
There was an array of other names that the Portuguese used to describe present day Mumbai, but none of the names were lent official status, on account of the topsy-turvy state of affairs that the foreigners were facing in the city.
It was with the arrival of the British in the 17th century, that the Portuguese names garnered official attention – the British used some of the Portuguese names, and produced an anglicized form from them, officially naming the city as ‘Bombay’.

People stuck to the name ‘Bombay’ for a long time, before the winds of change started blowing strongly again. By the time the metropolitan city had reached the very doors of the 21st century, its name had unofficially been divided into two categories –
(a) Mumbai / Mambai – Gujarati, Sindhi, Kannada and Maratha speaking people preferred to call the city ‘Mumbai’ or ‘Mambai’.
(b) Bambai – The Hindi speaking heartland of India used a ‘B’ instead of the ‘M’ to denote the city.
Needless to say, being a city that attracted throngs of people of all kinds, resulting in a very heterogeneous population, the city administrators felt the need to take a strong stand on the name of the city which was gradually being thrown open to wild conjectures and vagaries of the numerous languages spoken across the length and breadth of the country.
The intensification of the demand to fortify the Maratha identity in the region of Maharashtra, fuelled the change in the name of the city from ‘Bombay’ to ‘Mumbai’, which was constitutionally accepted in November, 1995.
The etymological roots of the name ‘Mumbai’ are excruciatingly difficult to trace – yet, from the accounts mentioned in this article, it can well be said that the name has undergone tumultuous times in the past! And why not? It only reflects the openness to change that the commercial capital of the world’s largest democracy has embodied over the years.