Mumbai, the maximum city has always been crowned as city of dreams, especially for aspiring talents who venture into the city with a heart full of wishes to make a mark in the film industry aka Bollywood.  Aspiring artists and newcomers often hover nonchalantly around the film studios to break the ice in hope of scooping a role in a movie with which they can kick start their career in Bollywood.
The famous studios have also strived throughout to encourage fresh talents while projecting the already famous faces. Film Studios are an inseparable wing of Bollywood and have walked together the path till date when Bollywood celebrated 100 Years of Indian Cinema. New and old studios both work to create magical sets and props to fascinate the audience and transport them into a dream world. R.K Studio is one such institution which has been a torchbearer of successful Indian movies produced and set in the studio’s backdrop 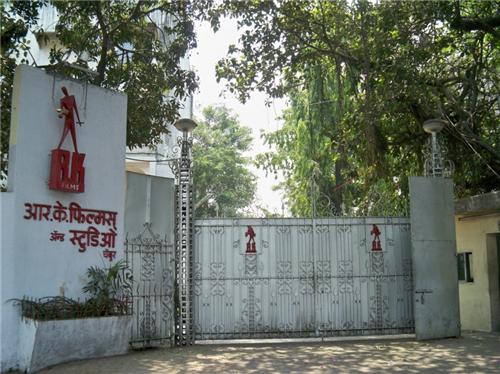 R.K Studio is the brainchild of the towering Raj Kapoor; who created the studio with all his accumulated money in 1950s in Chembur, Mumbai. He was determined and inspired to set up his own studio as while shooting for ‘Awara’ he and his crew were informed of vacating the studio they were shooting, which has been handover to someone else.
R.K Studio till date is considered synonymous with Bollywood’s journey and its overwhelming success and young aspirants still catch a glimpse of this sprawling studio by paying tribute before embarking on their mission. Grandson of Raj Kapoor, renowned film star Ranbeer Kapoor also did the same.
R.K Studio and R.K Films have produced several films and almost all of them have done commercially well; to name a few; Mera Naam Joker, Awara, Barsaat, Shree 420, Jis Desh Mein Ganga Behti Hain, Ram Teri Ganga Maili, Kal Aaj aur Kal, Bobby, Satyam Shivam Sundaram and the last one Aa Ab Laut Chalein produced by Rishi Kapoor, son of Raj Kapoor.
The intriguing part about R.K Studio is that though no new films have been produced and shot in this institution, still it is preserved by the descendants of Kapoor family and the costumes and some old props from successful movies are conserved in the studio premises. Ganapati Chaturthi and Holi are celebrated on R.K Studio’s premises by family members every year with a lot of fanfare and in presence of film fraternity.
Also Read:  Pali Beach Resort | Resorts in Mumbai for Couples | Water Resort in Mumbai, Arnala Beach Resort, Kelva Beach Resort,  Resorts in Navi Mumbai,  Resorts in Mumbai for Couples, Madh Island | Mumbai Bandra | Lokhandwala in Mumbai | Dadar in Mumbai | Slum Areas in Mumbai