Mumbai is not just one of the busiest mega cities of the planet; it is also a place where the forest and the sea live together.  Not many people know that what now constitutes the mega city of Mumbai was once a set of seven islands that had many creeks and bays between them.
The creeks were full of dense mangroves that were the resting places for many different types of birds.  Crocodiles roamed freely in the marshy places surrounding these mangroves. These small pockets of green are dense enough for you to get lost in them and are big enough for leopards and deer to roam freely and rivers to form and flow towards the sea.

The most spectacular green belt is the Sanjay Gandhi National Park. This wildlife sanctuary is right in the middle of the city and covers an area of 104 square kilometers.  It is a rich source of flora and fauna that are unique to the region.  Contrary to popular perception the Sanjay Gandhi National Park has actually grown.
Salsette (the Portuguese version of “Sashti” – a corruption of “Sahasashti” or sixty six) is still an island stretching from Bandra to Bhayendar. 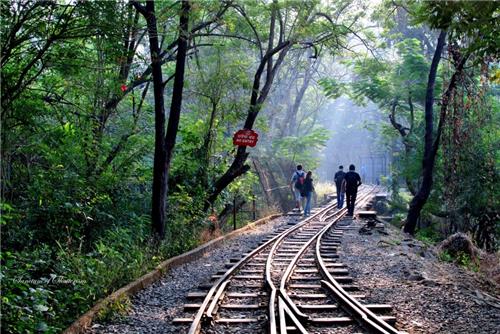 Of the four rivers that originate inside the Sanjay Gandhi National Park, the Mithi is the biggest. It starts from the Vihar Lake and receives inputs from the Powai Lake as well.  The second river is the Dahisar River that originates from the Tulsi lake and flows northwards through the suburbs of Dahisar and Gorai and opens into the Manori Creek to reach the Arabian Sea.
The third river is the Poisar River that originates in Borivali and runs southwards through Kandivli and Poisar to meet the sea at the Versova Creek. The fourth and perhaps the smallest river is the Oshiwara River that starts at the southern end of the National Park and flows through the Goregaon Hills and Aarey Colony to join the Andheri rivulet that runs from the granite hills and marshy land near Andheri to join the river near S.V Road.
The river then moves northwards again to open into the Malad Creek. Apart from the four rivers and the Vihar and Tulsi lakes, the Sanjay Gandhi National Park also houses the Kanheri Caves, which are Buddhist caves or viharas that were constructed as early as the 9th Century BC.
The Sanjay Gandhi National Park is known for its leopards and has been the subject of many documentaries made by TV Channels such as Discovery and National Geographic.  It is a well known fact that leopards from the forest have been known to stray into neighboring residential areas in Powai and Chandivli and have attacked unsuspecting residents.
Among the flora of the Sanjay Gandhi National Park, the most famous are the Karvy blossoms. These small plants are said to flower only once every eight years, the last such instance being recorded in 2008.  The other famous species is the bamboo plant and the park has huge tracts of land covered by lush Bamboo growth. Bamboo flowering is said to occur only once in a century (as it occurs once every 60 years) and the last such flowering occurred at the Sanjay Gandhi National Park in 2010.

Aarey Colony lies between the National Park and the Powai Lake. It is a heavily wooded area covering about 12 to 16 square kilometers of dense vegetation.  A road connecting the Western Express Highway to Powai passes through this area. One gets the feeling of passing through a forest when you pass through this area. 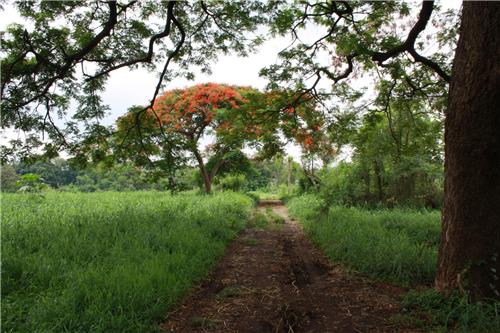 There are several small restaurants and a lake in an area called Chhota Kashmir where one can do boating.  Various species of hedges as well as Banyan tress can be seen here. The Aarey Colony and the adjacent Film City in Mumbai are under the control of the Maharashtra Govt. and have been featured in many Bollywood films that contain a forest scene, which gets invariably shot here.

Madh Marve is another scenic area that lies to the West of Aarey Colony. Madh is actually Madh Island. Yes the notoriously celebrated island of smugglers as indicated by several Bollywood movies.  Far from the bad depiction, it is a scenic place that has been largely untouched by urbanization. 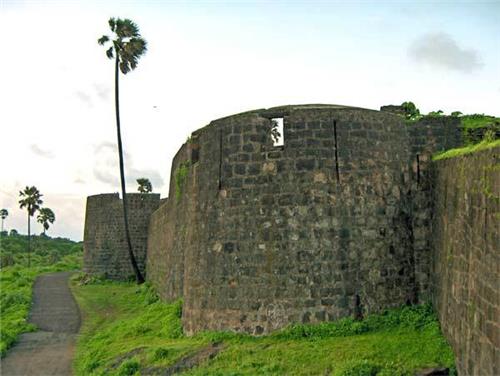 The waters are full of different varieties of shrimps and Bombay Duck (a longish fleshy fish unique to the area) and it would not be unusual to find these fish being salted and dried by the side of the road.
There are several woody areas here though a large part of the island is controlled by the Navy. (The INS Hamla is the name of the naval base at Madh).

Make sure to visit the beach and also to visit the Madh Island fort, which has featured in so many episodes of detective and horror TV serials on Indian Television.

Nature Treks in the Mangroves of Mahim and Vikhroli

There was a time when the island of Mahim had to be reached via an hour long ferry from Bandra through the dangerous Mahim Creek. Lady Jamshetji, the wife of the Hon. Sir Jamshetji Jeejeebhoy donated a princely sum of a few lakhs in those days to have a proper road connecting Bandra (in Salsette Island) with Mahim.
This is the Mahim Causeway – a huge engineering effort which was completed in 1845. The entire island of Mahim altogether by building the awesome Bandra Worli Sea Link. Encroaching slums and the Bandra Kurla corporate complex have destroyed the natural habitat of a region where crocodiles and pythons used to roam freely in its marshy wilderness.
However one can still take a left turn from the Western Express Highway to go towards Dharavi and observe a relatively vast area of mangroves as you drive by. 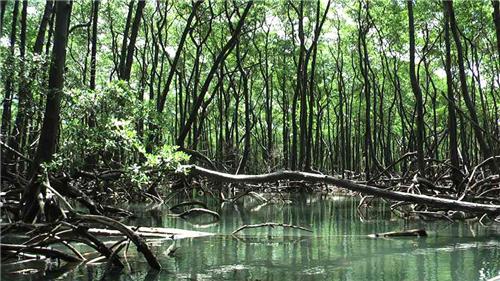 Mangroves are composed of salt resisting trees and once constituted a major part of Mumbai’s coastline.  Mangroves resist pollutants like lead and other heavy metals and therefore have not bowed down to industrial waste and garbage that now flows through the Mithi River. M
umbai’s coastline is still covered with about 22 square kilometers of mangroves and the best examples are the ones maintained by the Soonabai Pirojsha Godrej Marine Ecology Centre at Vikhroli. Known as the Godrej Mangroves, they are unmistakably identifiable to your right as you go on the Eastern Express Highway towards Thane.

Walkeshwar and Malabar Hill South Mumbai is the erstwhile business district of Mumbai. It is also one of the classiest places to live in. Malabar Hill is one of the most prestigious localities in Mumbai. It houses the chief minister’s residence.  The Kamala Nehru Park at Malabar Hill has a panoramic view of the Mumbai Chowpatty beach front and Marine drive right up to Cuffe Parade and Nariman Point. The garden has lovely Bougainvillea plants and creepers. 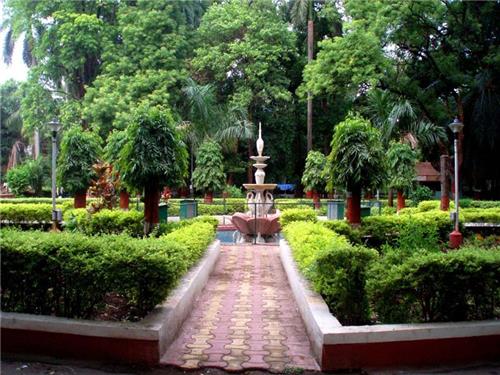 An identifiable landmark of Mumbai that is in the park is the Old Lady’s Shoe. Next to this was a place that was once called Cafe Naaz.  It was an open air restaurant with the best view in Mumbai and was featured in many Bollywood movies, the most famous being the sequence in the 1972 film Andaz where Rajesh Khanna croons Zindagi Ek Safar Hai Suhaana with Hema Malini.
Opposite Kamala Nehru Park lies the Hanging Garden now known as Sir Phirozshah Mehta Garden. It is a beautiful botanical garden with many different species of trees labelled neatly.  The garden is also lined with hedges which are shaped in various contours of animals and are a very pleasant sight. This garden has been in existence since 1881.
From this picturesque area you can walk leisurely down NS Patkar Road to reach Walkeshwar , which houses the centuries old Banganga temple that has a pond said to have been created when Lord Rama’s arrow pierced the earth.  Hence the name (Ban= arrow, Ganga = Holy body of water). It also leads to the picturesque Raj Bhavan complex, which is the official residence of the Governor of Maharashtra.
Notable among these are the Sagar Upavan Botanical Garden, which is sprawled over 46000 sq meters. Maintained by the Mumbai Port Trust it is one of the most scenic spots at the southernmost tip of Mumbai. It lies near the Colaba Bus Station.

The entire Navy Nagar area from the Afghan Church to the Tata Institute of Fundamental Research is also very picturesque and reminds you of a cantonment in the hills rather than an army outpost in one of the most crowded cities of the world.  You can take a limited stroll here and no pictures are allowed as this is an army area. What you can, however take with you is a breath of fresh air and inner peace and comfort. 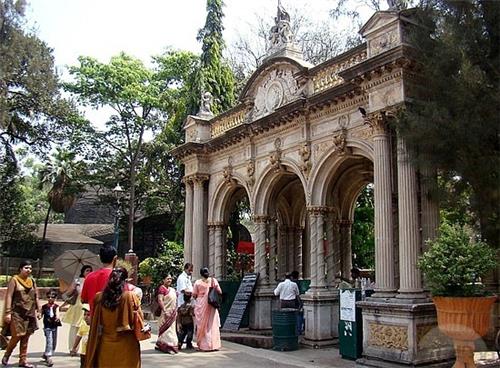 The Victoria Gardens at Byculla, now known as the Jijamata Udyan are also special as they not only have a great botanical garden within an old zoo but also contain a special garden for butterflies, a separate garden for medicinal plants and herbs, and a “Fragrance Garden” for the visually impaired. Here various trees known for their unique smells such as Champa, lemon trees, and Lasuni Vel or garlic smelling creepers are also present.  The gardens themselves are over 150 years old.

Other Popular Nature Treks in Mumbai

Shilonda Trail
Located in Sanjay Gandhi National Park in Mumbai. A former tribal settlement, the Shilonda Trail leads you through a gentle walkway, a dense forest, and a couple of beautiful streams till you reach the end point that is actually the farthest point in the national park.
Yeoor Hills
Situated in Sanjay Gandhi National Park. The trekkingtake about about 30 minutes, at normal walking pace to the top where you can enjoy panoramic view of Thane.
Chinchoti Trail
The trail that begins from Kaman Phata which begins through a small village and leads up to a few streams that you have to cross.
Tungareshwar Trail
The trek is walk 4 kilometres up to the Shiva Temple or head a further 3 kilometres upto the Balayogi Ashram or you can also opt for longer trail can climb up to the Vajreshwari Springs.