The metropolis is an abode to some of the most memorable monuments and holy places belonging to different religions. Religious spots starting with mosques, temples and even churches are found in different parts of the city. 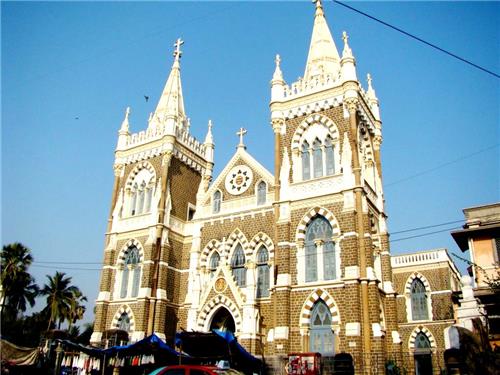 The Mount Mary Church is one of the greatest Christian wonders of Mumbai since the ruling period of the British in India. It is one of the largest and most beautiful churches across India, with interiors to die for.  The Mount Mary Church is located in Bandra West and is Mumbai’s most popular church. The church is situated atop a hill mound which is around 80 meters above sea level facing the Arabian Sea.
It has a huge following of devotees and Christian pilgrims who visit the place, at least once every year. The church welcomes people from all religions who have faith in the existence and power of Jesus and Mother Mary. It has the shrine of Virgin Mother Mary placed inside it, which has inspired the name of the church. The shrine of Virgin Mary is also the reason behind the church drawing so many tourists and visitors from different parts of the world to pay a visit.

The church is also referred to as the ‘Maulicha Dongar’ Church which translates to the ‘Hill of the mother’ as it is located on a small hill and the shrine of Mother Mary is considered to be the most pious form God’s representation on that hill. 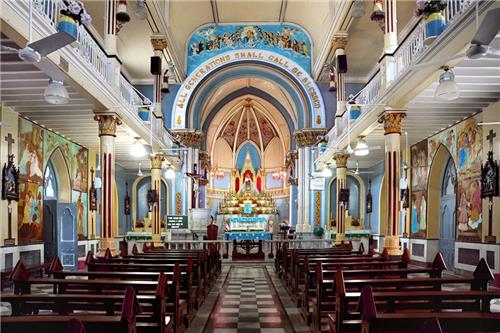 The architecture of the Mount Mary Church is almost 100 years old while the original story of the church is said to go back till the 16th century during the Portuguese reign along the western coast of India.

Local myths and stories have it that, in the year 1700, Jesuit priests from the land of Portugal were carrying the pious Idol of Mother Mary to its present location, where they constructed a small chapel as a form of their faith, respect and love for Virgin Mary.
At the same time, Arab Pirates, who assumed that there might be some treasure hidden within the statue, violated the idol and disfigured it by chopping of one of its right arm. The Marathi speaking population within the state of Maharashtra, refer to Mother Mary as ‘Math Mauli’ and also visit the church often in spite of belonging to different religions.
A festival in the name of Mount Mary Festival is also celebrated as a dedication of faith of the people in Virgin Mary, every year in the month of September, for almost a week.  It is a form of celebration of Mother Mary’s birthday and is also referred to as the Bandra Fair and is flocked by thousands of visitors every year. So breath in the peaceful air and serene essence of the Mount Mary Church by paying a visit the next time you take a trip to Mumbai-the city of dreams!
Read more Official Government Sites of Mumbai, Film City Mumbai, Handicrafts in Mumbai,