Kanheri cave is one of the greatest tourist destinations in Mumbai, which is located within the Sanjay Gandhi National Park.  The Archaeological Survey of India under the ministry of culture is the chief organization for the archaeological researches and protection of the cultural legacy of the Kanheri Caves, Mumbai. 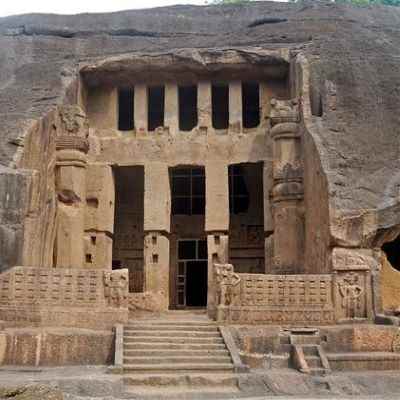 The Kanheri cave was strived up because of the presence of ancient seaport towns. The 109 Kanheri Caves lining the side of a rocky ravine, which is 5km from the northern park entrance.  These caves were used by Buddhist monks between the 2nd and 9th centuries as viharas or monasteries and chaityas or temples.
The word Kanheri originates from the Sanskrit word Krishnagiri. The name in vogue was "Khaneri" which means Black Mountain. Here each cave is totally different from the other.  In the 3rd century the Kanheri Caves became a distinctive. Around 34 unfinished paintings of Buddhist also can be observed inside the caves.

About Viharas at Kanheri Caves in Mumbai

Viharas are the residence or monasteries of the Buddhist monks. So that lead to the clues of the monastery population once present in Kanheri. Viharas are typically compact caves more human in scale.  Inside the chambers one can even find rock cut, some of them are also with a pillow like feature as a headrest! Many viharas have benches and seats carved as integral part of the caves. The Buddhist used to worship in those viharas

History of Kanheri Caves in Mumbai

First of all it was a fully fledged and famous learning center of Buddhism in the ancient days. The sophistication and the sprawling nature of Kanheri caves vouch for this. The second point is Kanheri’s ease of access.  Apart from Elephanta Caves, no other caves in the region have the best connectivity than Kanheri. In the number of caves made in a single hill, Kanheri is the largest such Buddhist site in India.
Its history of spans from as late as AD 11th century to as early as the BC 3rd century. These stupas often contained a large number of clay tablets inscribed in 10th century A.D. The other evidence of the Buddhism is the cemetery located near to the caves separated with a terrace for the purpose to bury the Buddhists.

The Batch of Rock Monuments

Different kinds of works can be found from the time of Buddhists and those works are outstanding. Near to the cave there is a small and beautiful waterfall which is very fascinating to view. Also the natural streams and rivers are very beautiful which are besides to the caves.

Shopping At Kanheri Caves in Mumbai

There are not much shopping facilities available near to the Kanheri caves and Sanjay Gandhi national park. But the visitors can get the things like handicrafts, clothes and accessories outside of the park.


The Excavation at Kanheri Caves

There are mainly four categories, which can be observed under the excavations at Kanheri. The first type is the, the place of worship of the Buddhist lived here.  Viharas or monasteries are the second category, which consists of single and multiple chambers where the Buddhist monks resided.
Rock-cut benches and seats are the last category which was included under the excavation project by the archeological department of India. The archeology department also found, made with stone, a small gold box containing a piece of cloth, a ruby, a silver box, a pearl, gold pieces and two copper plates dated in A.D. 324 from Kanheri caves. These caves can be considered as a proof of the ancient Indian culture, in which the harvesting was done by using the help of rain water.

How To Reach Kanheri Caves

Borivali Railway station is the nearest railway station to the Kanheri caves. People can catch any local train to Borivali and can reach to Kanheri, so the visitors can easily reach to the Kanheri caves, after getting down from the train, one can get the autos from the station.
Kanheri caves are located deep inside the Sanjay Gandhi National Park. Bus transport is available in this place every hour. Visitors must pay entry fees at the park gate and also at the cave entrance.
Read More
Hotels in Mumbai, Pali-Beach-Resort, Arnala-Beach-Resort, Beaches-in-Mumbai, Hotels-in-Mumbai