Among the beautiful skyscrapers, the azure Arabian Sea, the vast clean roads of a glamorous urban city of Mumbai, there lies a magnificent old piece of land that tells the tale of a city of the quondam era and its gorgeous past. Let’s take a look below at the most important heritage sites of the city of Mumbai. 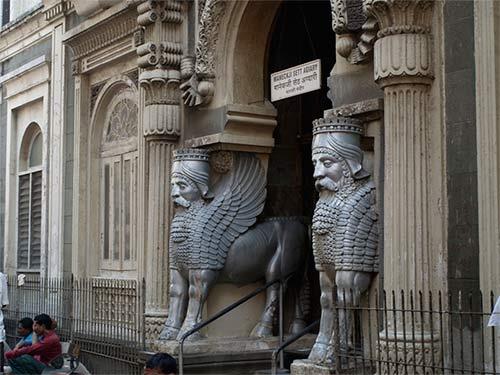 One of the most popular heritage sites of Mumbai is the Fort area of South Mumbai. This area used to be the heart of Mumbai (then Bombay) in the 18th century. The Fort area is located around the Fort George which was built by the British East India Company. The Fort George was actually an extension of the Bombay Castle built in 1769. It was named after George III of the United Kingdom. The Fort was demolished in 1862.
The Fort area is now a very busy financial hub of Mumbai city. It houses several important offices and headquarters. Some significant names are the Bombay Stock Exchange, Tata Group Headquarters and Reserve Bank of India headquarters etc. The Fort Area of Mumbai was declared a protected area under the regulations of Maharashtra Government Urban Development Department. 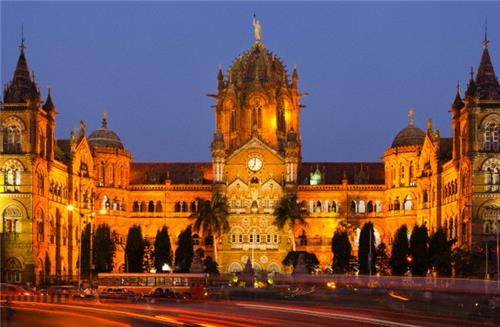 One of the most prominent heritage sites of Mumbai is the Chhatrapati Shivaji Terminus railway station.  This is also one of the UNESCO World Heritage Sites situated in India. CST was formerly known as Victoria Terminus Station and is the perfect example of the glorious Victorian Gothic Revival architecture that also took place in India in the mid of eighteenth century.
The building that houses the headquarters of the Central Railways was designed by the acclaimed British architect F. W. Stevens. He received influences from both the Mughal Pattern and the Victorian Italianate Gothic architect and gave the design a revival.  Victoria Terminus actually gave Bombay the term of ‘Gothic City’ of India which essentially was popular among the international mercantile ports.
The main building at Bori Bunder was built in 1887 to honour the Golden Jubilee of Queen Victoria. It took typically ten years to turn the design of Mr. Stevens a marvelous piece of reality.
The arched tympana, stone mesh works, stone carvings of flora and fauna and all the other detailing of the heritage building is still carrying its past authenticity. Chhatrapati Shivaji Terminus was declared a Heritage site by the Maharashtra Government in 1997.
The terminus building is a proud cultural possession of not only Mumbai but also the whole country. The name of the Victoria Terminus Station was replaced by Chhatrapati Shivaji Terminus in 1996. 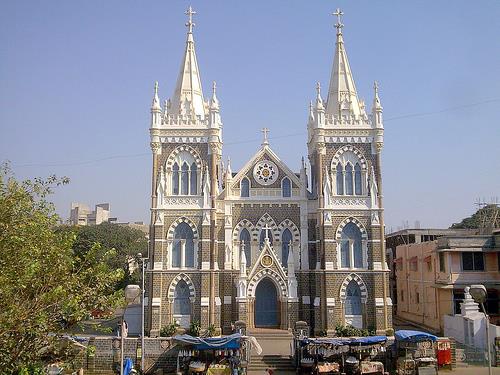 Mumbai is just not a city of blazing and lively modern city; it has its great share of a glamorous history. The Mount Mary Basilica also known as Maulicha Donger o the Hill of the Mother in Marathi is a stunning place located at an eighty meter high hillock in Bandra.

The church edifice is itself 100 years old, but the history of the statue of Our Lady takes us back to the 16th century. The Jesuit priests of Portugal carried the current statue to India and made a chapel here at the current location.
The church became a victim of Arab pirate attack and the statue was somewhat discarded. It was rebuilt and the statue was subbed by a statue of Our Lady of Navigators in the nearby St. Andrews’ Church. The new church building was designed by Shapoorjee Chandabhoy in 1902. The church is still very popular among people from various religious faiths. 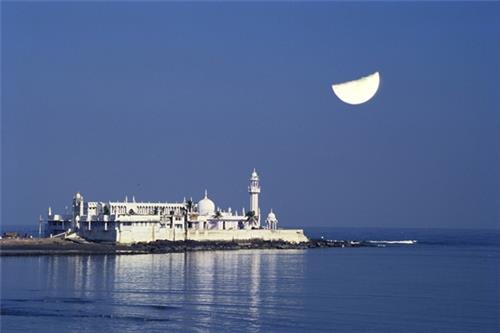 If the words Haji Ali reminds you of just a beautiful Hindi filmy song, you are definitely missing something. Haji Ali Dargah, mosque of the famous saint Pir Haji Ali Shah Bukhari.

Haji Ali Dargah or popularly called only Haji Ali is situated at about 500 yards off the shoreline of Worli in the heart of Arabian Sea. The complex of the Dargah houses a tomb of the Saint and a mosque as well.
It is standing on a set of rocks rising from the water that creates a unique feature of the place. This early 19C  marvel has white domes and minarets influenced by the Mughal School of Architecture of the fifteenth century. It is a fine example of Indo-Islamic architecture which still manages to fascinate the visitor’s mind. The entrance causeway connecting the land and the Dargah is 620 meters long and is dependent on the sea tides.
The pavement remains submerged in water during the high tides and hence is accessible only during the low tides. This is an exceptional attribute of the place. It is voted as one of the Seven Wonders of Mumbai recently. 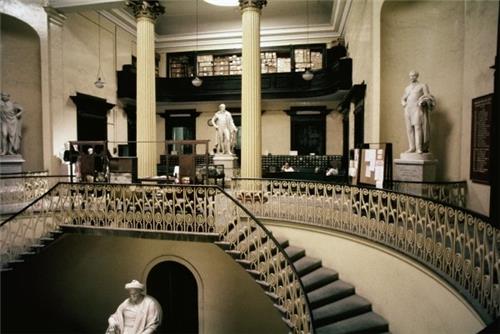 The city dwells countless places those hold some past glories in several fields. If the city had been one of the most significant abode for India’s freedom movements, Mumbai has a grave heritage of conglomerate ignited minds. Asiatic Society of Bombay is a perfect example of Mumbai’s cultural and literary inheritance.
This learned society was set up in 1804 by Sir James Mackintosh to encourage field of Asian studies and to promote useful knowledge about India. The literary Society of Bombay which was initially named as the Bombay Branch of Royal Asiatic Society (BBRAS) was an important extension of the Royal Asiatic Society of Great Britain and Ireland till 1954 and renamed as the Asiatic Society of Bombay after the separation.
The library of the Society houses over a hundred thousand books and manuscripts among which 15000 are declared rare and immensely valuable. Over 3000 manuscripts are in ancient Sanskrit, Persian, and Prakrit languages. The library also possesses around 12000 coins including a gold coin of Gupta King Kumaragupa I, a rare gold Mohur of Mughal emperor Akbar and some coins of Shivaji.
The most important and valuable possessions of the library are one of the two original copies of Dante’s Divine Comedy, a manuscript of the Persian great epic Shahnama of Firdausi, five Buddhist caskets unearthed from the ancient port of Sopara etc.
The Town Hall of the Asiatic Society of Bombay was built in 1830, much later than the establishment of the main society and now declared as a heritage structure. The beautiful building was once stated as the most significant structure yet erected in India by Sir John Malcom, the then governor of Bombay.


The Gateway of India 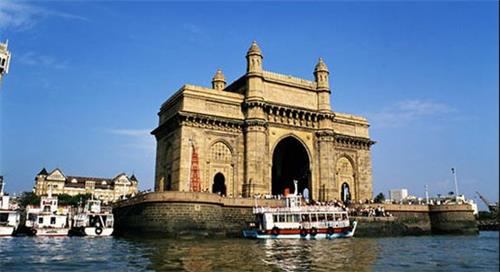 The British Government of India wanted to commemorate the landing of King George V and his wife Queen Mary on the 2nd February, 1911 at Apollo Bunder of Bombay (Mumbai) read more here 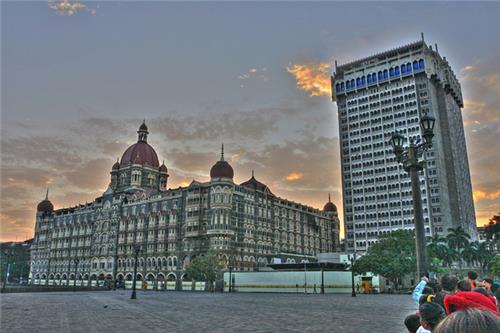 A five star hotel at its best of luxury and services, Taj Mahal Palace is a true gen from a range of aspects. The flagship property of the Tata Group, Taj Mahal Palace was a gift from Jamsedji Tata to his beloved city of Bombay.
The hotel has been witnessing several significant incidents happened over Mumbai. On 26th November, 2008 Taj Mahal Palace became a miserable victim of a gory terrorist attack when at least 31 died at the hotel during a three-day battle among the terrorists and the Indian commandos. 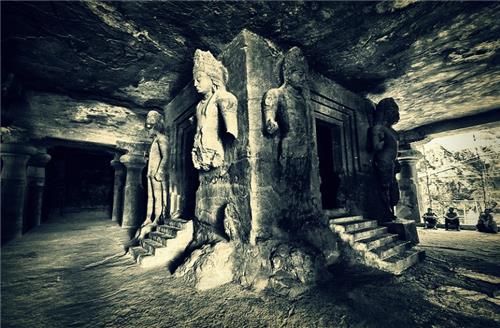 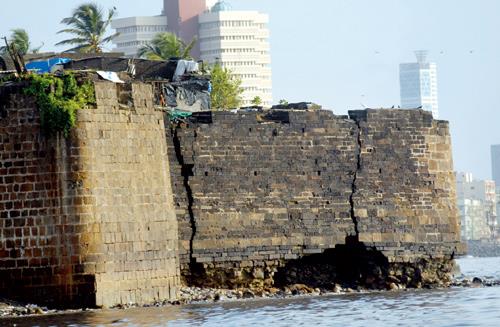 Bombay Castle is one of the oldest buildings of Mumbai. It would not be surprising to say that the city and the fort grown up almost together and witnessed numerable incidents taking place in the city.
The present remaining Bombay Castle was built by the British on the site where the Manor House was once built by a Portuguese named Garcia de Orta. The Manor House became the Portuguese Governor House after Orta leased it to the Portuguese authorities between 1554 and 1570. 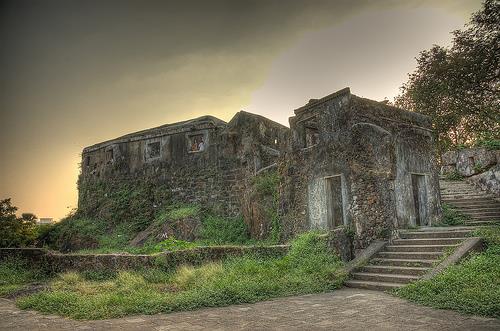 Another heritage site in Mumbai set up and left by the British East India Company is the Sion Hillock Fort. Built in around 1669 to 1677. The Sion Fort is located atop a hillock and was at a boundary between the British authorized Parel Island and the Portuguese-held Salsette Island.
The Fort gives a beautiful panoramic view of the nearby areas. The fort was declared a Grade I Heritage Site in 1925. 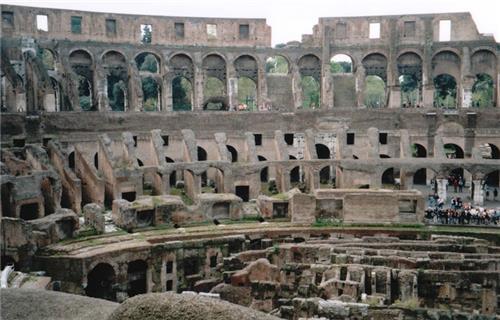 Another constructional legacy of the Portuguese rulers of Mumbai is the Castella de Aguada or famously known as the Bandra Fort. The Fort was set up in 1640 at Land’s End in Bandra as a watchtower. The Portuguese were eventually ceded the territory to the British but the tower remained as valuable as ever.
The fort was invaded and damaged by the Marathas in 1739 and the British regained the possession of this area in 1774 defeating the Marathas in the First Anglo-Maratha War. In 2003, the Bandra Fort received a conservation programme started by the Bandra Band Stand Residents’ Trust. 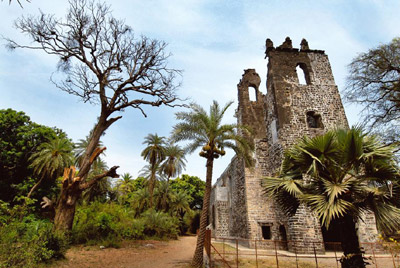 In an attempt to avoid potential attacks from the Mughal-Siddi alliance, the British set up a fortification at the Sewri area of Mumbai (then, Bombay) in 1780.  It is located on a hilltop at the island of Parel and was well equipped with a garrison of 50 sepoys and eight to ten mighty cannons. As the fort was established for the security and defense purposes the Sewri Fort lacks any significant embellishment.
The fort is considered a Grade I heritage Structure in Mumbai and now is owned by the Department of Archaeology and Museums of the Maharashtra State Government. 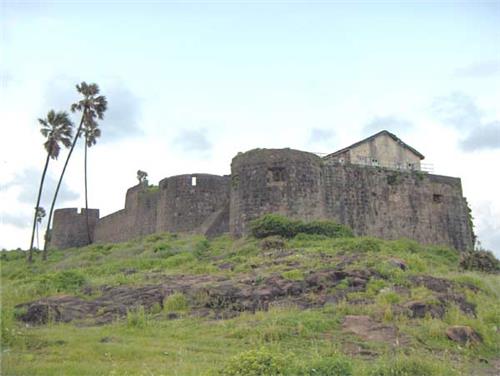 The Madh Fort, small fort situated at the Madh Island of North Mumbai. The fort was built by the Portuguese but lost it to the Marathas during a war against them in 1739.   The fort which is also known as the Versova Fort was actually built as a watchtower guarding the Marve Creek from the Aksa Beach. The fort is now own by the Indian Air Force.

Madh Fortis a popular shooting place for several film and television serials and especially loads of episodes of CID, one of the most popular and the longest running serials of Indian Television have been shot here.
Also See: Fashion Street Mumbai | Manish Market in Mumbai ,Resorts in Mumbai, Resorts in Mumbai for Couples, Hotels in Mumbai, Weekend Getaways from Mumbai