Sufi saints have had a special association with Mumbai and there are at least 25 famous shrines dedicated to Muslim Saints who lived and died in and around Mumbai. Some of them are more than 400 years old.
These shrines are pilgrimage centers for many celebrities of Mumbai belonging to diverse faiths and have been celebrated and praised in several Bollywood movies, which in turn has added to their fame. 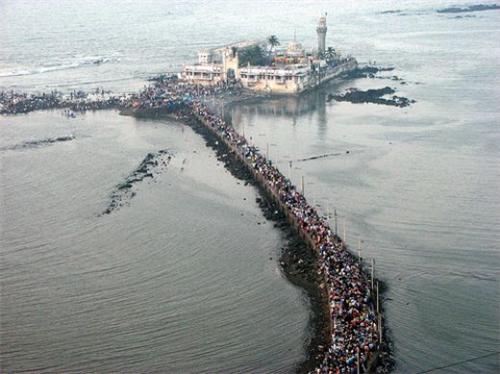 The most famous Muslim shrine in Mumbai is arguably the Haji Ali Dargah. Seen from across  Lala Lajpatrai road as you go from Worli towards the junction of Peddar Road, Tardeo Road, and Dr. E. Moses Road, the Shrine is on an island that about half a kilometer into the Arabian Sea. A small road connects the island to Lala Lajpatrai road.

The Haji Ali shrine directly faces the Goddess Mahalaxmi Temple that lies to the south on the erstwhile Bombay Island and the Maa Hajjani Mosque and Dargah on the southern peninsula of the erstwhile Worli island (The present city of Mumbai has been formed by joining seven islands previously known as Bombay, Greater Colaba, Little Colaba, Mazgaon, Worli, Maham and Parel).
The small bay between these two tips is called the Haji Ali Bay. To its east lies the famous Mahalaxmi Race Course. Legend has it that the shrine was constructed in 1431 in the memory of the Sufi mystic Pir Haji Ali Shah Bukhari, originally a Persian merchant in Bukhara, who gave up his business and his wealth to embark on the spiritual path.
One day he spotted a wailing woman who told him that her husband had beaten her up as she had accidentally spilled a container of oil.  Haji Ali is said to have punctured the ground with his finger and caused oil to gush out from the ground for the woman’s benefit. However he was later plagued by dreams that accused him of harming the earth.
The Haji Ali shrine has been featured in many Bollywood films, recent ones being the song “Piya Haji Ali” from the film Fizaa and extensive scenes shot for Madhur Bhandarkar’s Chandni Bar. Many scenes from actor Emran Hashmi’s movies and a few scenes of the actor Ajay Devgan movie Halla Bol were also shot here. 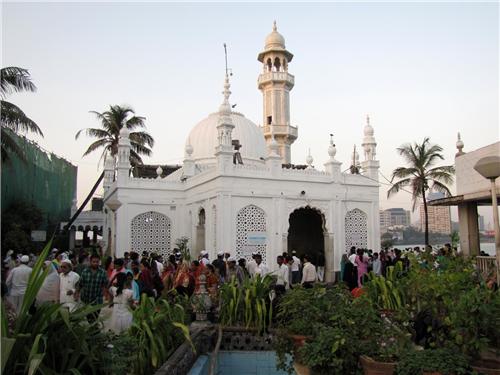 The other famous shrine is the Mahim Dargah built in the memory of the saint Makhdoom Ali Mahimi. The Sufi saint whose real name was Zainuddin Alauddin Abul Hassan – was a scholar who wrote many philosophical treatises on Islam for which he was given the title Qutb-e-Konkan.

The most famous aspect of this shrine is the importance given to it by the Mumbai Police. Legend has it that the saint appeared as a bearded man and protected a police officer who was being attacked by smugglers.
The Legend goes back to the 1920s and since then the Sufi saint is regarded as the nemesis of smugglers. The British officer in charge of the Bombay police made special arrangements for the conduct of the Mahim Fair – an annual festival held in the memory of the saint at the Dargah.
The Mahim Dargah shrine is nearly five hundred years old. It was also constructed in the fifteenth century and is situated off Veer Savarker Road (former Cadell Road) on Hazrat Makhdoom Ali Faqir Street.  The Mahim Dargah has been famously featured in the song, "Walion Main Wali Makhdoom Allah Re Allah" featuring Mithun Chakraborty in the film Ustaadi Ustaad Se.

This small road has many important landmarks such as The Birla Arts Center, The once glorious Liberty Cinema, and the entrance to Azad Maidan and of course the holy shrine of Hazrat Bahauddin Shah Baba.
On Fridays, this small street is crowded with people who offer namaaz. This shrine is frequented by people of all faiths especially those who come from afar to get treatment at Bombay Hospital. 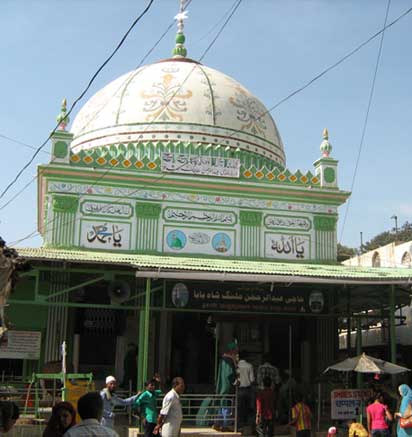 Legend says that the saint was sent as a messenger of Allah from Medina in the 12th century to fight the atrocities of a cruel king who once ruled here.
Legend also goes that on arrival, he was hospitably treated by a Brahmin family, whom he blessed.  He turned the king and his queen to stone and feed the people from their cruel regime.
The shrine is administered by a Brahmin family - the Ketkars - whose ancestors fought for the Marathas to successfully defend the region against the British.
Their family was therefore granted administrative rights to the region, which included this shrine and they have been looking after it since 1780. The shrine is situated about 38 km away from Mulund, which is the last suburb of Mumbai on the Central Railway line. From there, a local train will take you to Kalyan Junction.
This trek is refreshing instead of tiring (which adds to the spiritual ambience of the place) and there are two mandatory stops on the way, the Dargah of Hazrat Bakhtawar Shah (First Salaami or salute) and the Dargah of Hazrat Sultan Shah (Second Salaami or salute).

Malanggad fort is further uphill (an additional trek of about 30 minutes). Another point to visit is the Ghode Ki Taap – a sacred underground spring that is said to have sprouted when the horse carrying the saint Haji Malang Baba - flew into the sky and landed directly on the mountain.
Clear sweet water is said to have sprouted from the mountain where his hoof struck the ground. This spring still sprouts sweet water and is the main source of water supply for the mountain.

There is also a stone near the shrine, which cannot be lifted single handedly even by a strong person but if many people come together and merely try to lift it together by applying just a finger each, then the stone gets miraculously lifted!
This is a clear spiritual message for living in harmony. This was featured on the National TV channel’s program, Surabhi and the Haji Malang shrine has also been featured in many film songs.


Other Famous Dargahs in Mumbai

Andheri, the Mumbai suburb known for its corporate IT offices and also as the Hub of the film and TV activities of Mumbai – is also blessed with many holy shrines.
The unique Gamdevi temple dedicated to the Goddess Durga on Gilbert Hill – which is the only monolithic granite structure of its kind in Western India – is indeed famous.
But Andheri West is also graced by the shrine of Hazrat Syed Haji Aminuddin Malang Badshah Qadri, which is close by to the Gamdevi Shrine.

Hazrat Shukhrullah Shah Baba Dargah
From there one can take a bus to the Versova beach where the shrine of Hazrat Shukhrullah Shah Baba is located. Legend states that the Sufi saint blessed the place and performed many miracles to reveal the grace and majesty of God to the common folk.
He has blessed the seafaring fisher folk and therefore his shrine is revered by the villagers of Versova in much the same way as they revere the shrine of the Goddess Hinglai Devi, which is also nearby.

Hazrat Baghdadi Shah Baba Dargah
From Versova beach one can take a ferry to Madh island, and from there visit the famous twin shrines of the godesses, Harbai Devi and Hardai Devi and move on towards the other end of the island towards Ambu Bet, where another Dargah sits on another island that one has to reach by ferry.
This is the Hazrat Baghdadi Shah Baba Dargah and is a place of unlimited spiritual succor to people who visit. They say the blessed and the devout can even witness dolphins leaping from the water to render a salute to the saint’s shrine.

Dongri Dargah in Mumbai
There are many other shrines notably the shrine of the saint of Dongri – Hazrat Syed Haji Abdul Rehman Shah Qadri, who according to legend, could never be imprisoned by the British.
A contemporary of the famous saint Saibaba of Shirdi, (he passed away in the same year as Saibaba – in 1918) – Hazrat Syed Haji Abdul Rehman Shah Qadri, used to meditate on a black rock and was imprisoned by the British several times only to miraculously disappear every time he was captured.  This black rock is now part of the shrine dedicated to him and is situated near Dongri police station.