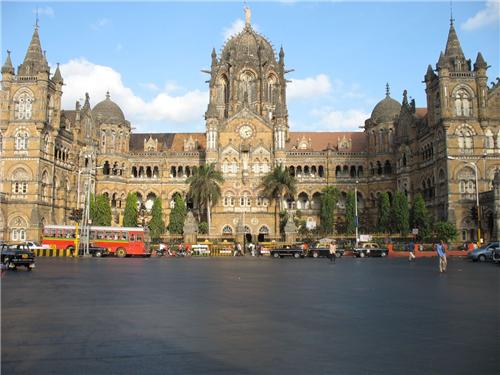 The Churchgate, which is also famous in the name of Veer Nariman Street.
The Mumbai was a city covered with walls around it, in the time period between the 18th and mid 19th century. This city wall had three major gates.

The church gate was one of those gates and the gate has been named after the St. Thomas Cathedral in Mumbai.
During the second half of the 19th century, these walls around the Mumbai city were removed for the sake of expansion and development of the city.

The history of the church gate railway terminus lies associated with the history of old Mumbai. The old Mumbai was a city covered with walls around it. Church gate was one of the 3 gates of the city wall.
Now the church gate hosts the famous Churchgate railway terminus, which is figured in the list of top railway stations in the city in case of passenger density. The Churchgate is the first railway station started working under the Western Railway suburban network in Mumbai.
Colaba station was the southern end station in Mumbai till the year of 1931 and when the railway line after the Churchgate was cancelled in 1931, the Churchgate obtained the position of the south end railway station in the Mumbai city.
In 1855, the Bombay, Baroda and Central India Railway were inaugurated along with the beginning of construction works of 29 miles lengthy railway lines from Ankleshwar to Uttaran and the line extended up to Bombay in 1859.
The first suburban train in Mumbai was started its service in the month of April in 1867.

Origin of the name Churchgate

Major locations to visit near to the Churchgate Mumbai

The Churchgate is a prominent location in the Mumbai city. The marine drive, renowned in the name queen's necklace and the posh side of the city, Nariman Point are some of the important sites in the area.
Brabourne Stadium, Wankhede Cricket Stadium, Mahindra Hockey Stadium and Oval Maidan are located close to the location and the popular tourist locations such as Elephanta Caves, Gateway of India, and Rajabhai Tower is easily accessible from Churchgate.

Churchgate, as a Shopping Destination in Mumbai

Churchgate in the South Mumbai hosts a no. of heritage buildings and is also one of the shopping hubs in the city. This place is one of the prominent shopping areas in the city. Saris are the most demanded item of sale in the location.

Churchgate, as an Educational center

The Churchgate is also famous as one of the educational centers in Mumbai. Various educational institutions such as Jai Hind College, University of Mumbai, Government Law College, Indo German Training Center and K.C. College are working in the nearby places of the Churchgate.
Read More Fort Mumbai, Balaji Temple, Shiva Temple in Maharashtra, Monuments in Mumbai, British Council library Mumbai,