Mumbai is the home to several Churches, some new and some which take us to the bygone era. These Churches are excellent examples of exemplary architecture. Some of these are even important religious landmark of the city. Every year thousands of people visit them from, not only from within the city but also from all over the country.

Living word church, Bandra is an English speaking, Evangelical and Bible-based church in Mumbai. It has two services at 9am and 11am (every Sunday). The foundation idea of the church was laid by Alan Vincent and Grenville Fernandes during the time of the early seventies.

You can conveniently reach at the church by boarding a local train to Bandra Station. You can take a local transport from here up to Bandra Reclamation, Hotel Rang Sharda. There is a lot of space for parking vehicles, so do not worry if you are on your own vehicle.

If you get stuck and have no idea which way to take, you can call on 09022284800
The church also has a KidZone. Where children can enjoy, play games, have fun and can interact with the kids of similar age group.

You can attend the services of the church on every Sunday at:
ADAPT Hall,
Bandra Reclamation,
Near Hotel Rang Sharda,
Bandra West, Mumbai. 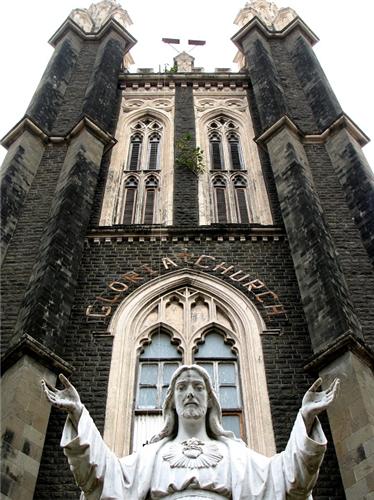 Next comes the Gloria church, that is an age old treasure of Mumbai. It was established on 18th January 1572 by the D'Souza family which later became a parish that became dedicated to "Nossa Senhora da Gloria". It is now known popularly as "Gloria Church".

The Church is built in accordance with English Gothic Style structure. It has four Turrets which as high as 160ft. It is shaped in the style of a Latin cross. The Towers in the Church were architecturally made according to the Canterbury Cathedral, England. These are considered to be the highest in the entire city. The church is 205 feet in length.

These are the highest among the other Churches in Mumbai. The Church is 205feet in length and 15 feet in depth. The Church boasts of its Gothic style of architecture, where there is a beautiful carving on the pillars that meet above making pointed arches. The work of colored glasses in the Church is extraordinary.

The Gloria Church is located on Sant Savata Margin Byculla in Mumbai.

Now let’s take you to another well known Church in Mumbai, that is the Portuguese Church. Located on S.K. Bole Road in Dadar, It is a very old Church that was made in 1596 by a Portuguese, Franciscans who named it as “Nossa Senhora de Salvação”. People also refer to this Church as the Church of Our Lady of Salvation.

The architecture of the Church is based on the concept of three basic periods in the life of Christ, which correspond to "The Baptism" that symbolizes preparation, "The Public life" that symbolizes enlightenment and "The Crucifixion" that is symbolized by the sacrifice.

Mass timings of the service at Portuguese Church are

Located in Bandra in Mumbai, Mount Mary Church is a Roman Catholic Basilica. This Church is among the most visited religious places in the entire city. Every year on the first Sunday in September, a feast is celebrated in the honor of the birthday of the Blessed Virgin Mary. This is celebration continues for the whole week. This fair is famous as the Bandra Fair. Every year thousands of people from all over the country gather here to participate in this fair.

In 1570 it was a simple oratory made up with mud and was taken care of by the Jesuit Fathers. In 1587 it was placed under the authority of the Parish of Santa Ana. In 1738 it was destroyed by Marathas. The statue of Our Lady here is from the 16th century. It was brought from Portugal by Jesuit priests.

The Church has a beautiful semi – Gothic style of architecture.
The Church has regular services on weekdays, first Fridays, First Saturdays.

Next comes the Holy Family Church. It is located at Chakala in Andheri (East) in Mumbai, the Holy Family Church was established in the year 1943. Since 1965 the Church is a famous religious spot for worship among the people of the city.  A holy family school which is a parish institution was also constructed in 1963. It is located just next to the church.  Holy family Hospital a famous hospital in Mumbai also runs under the authority of the Church.

To get to this place you can take a Mumbai local train and get down at the Andheri station (East) and take a local transport such as Auto/taxi and you are there in just 10-15 minutes. Located in Kurla, which is a suburb area of the city of Mumbai, Holy Cross Church, Kurla (belongs to the Archdiocese of Bombay) is a Roman Catholic Church. It is considered to be one of the oldest and most visited Churches of the city. It was built in 1588 during the era of Portuguese by the Jesuits and was rebuilt in 1848. 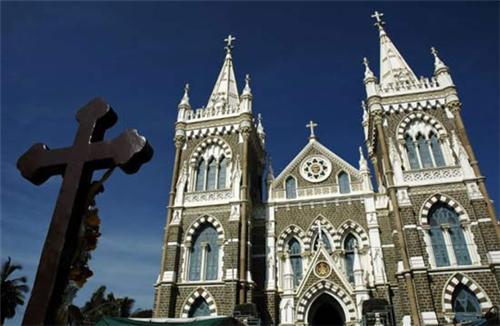 The Immaculate Conception Church was established in the fifteenth century. This is a monument of national significance and an archetypal history is located in IC Colony (off Laxman Mhatre Rd) in Borivali West (Mumbai).

Adjoining the present Church building are the Mandapeshwar caves are present in the area adjoining which are as old as 750-850AD. It was founded by Fr Antonio do Porto, a Franciscan missionary. The Church holds an extremely popular Christmas mass on its grounds. During this time around 12,000 people mark their attendance and the number is constantly growing.

Mass Services at the Church

Another one of the oldest Churches in Mumbai is the St. Andrew's Church, it was built in 1575 by the Portuguese Jesuits. Located on the seashore of the Bandra suburb, it is at 115 Hill Road, near Holy Family Hospital in Bandra West. Until 1620, it was the first Church in Bandra.

The Church is made in Portuguese-style, with faced incorporating two bell towers. Above the statue of St Andrew, there is a small round aperture in the centre of the front facade. When the sun rises, the rays enter through this hole and illuminate the Church. The Church also boasts of its stone cross that is the oldest of its kind in the entire city and was carved out of a single stone. It was brought here from the Church of St. Anne. The Church also houses a mini museum.
Regular mass services are held at the Church every day.

From 1549 to 1737 around 9 churches were established in Thane town and its surrounding. One of them was St. John the Baptist Church (established in1579) by the secular clergy. When Thane was captured by the Marathas in 1737, they destroyed all the churches except that of St. Anthony.

The Marathas allowed only the St. Anthony Church to remain active and functional. When the secular clergy took over St. Anthony’s, it names was changed to, St. John the Baptist. The church was extended in 1965 so as to accommodate the increasing number of attendees, and two schools were opened in the parish. It is located at Jambli Naka in Thane.

Located at the intersection of L.J. Road and Mahim Causeway Lady Jamshedji Road in Mumbai St. Michael's Church is the oldest existing Portuguese buildings and one of the oldest Catholic churches of the city of Mumbai. It is also known as Mahim Church. The Church was established in the year 1534 and was rebuilt again and again several times. The Church is famous for the fact that thousands of people gather here for its Novenas on Wednesdays.

Mass services at the Church

Located on D.N Road in Church gate in Mumbai, St. Thomas Cathedral is regarded as the  The Church boasts of its Neo-Gothic and Neoclassical architecture and also is listed in UNESCO Asia-Pacific heritage list. The Cathedral of St. Thomas is one of the most sought after religious place for the Christian community in the city of Mumbai. It was built in 1718, and is it considered to make the settlement and the presence of British people in India. It was built to improve the standards of the British settlement.

The interiors are lined with Plaster of Paris. It has stained glass, arched windows that are polished with brass. The Church was made in Neoclassical and Neo-Gothic styles. If you want to peep into the window of old Bombay, there are no other places other than this. Several fine eateries are there in the vicinity.
Holy Communion: Every Sunday at 8:40 AM

The Saint Joseph Church in Mumbai

The next Church in the row is The Saint Joseph Church established by Fr. Richard in 1988. It is located on St. Joseph Nagar on Mira Road (East) in Thane. It has around 6000 families, which are divided into various Communities which form approx. 21 zones.

Our Lady of Dolours in Mumbai

Built in 1853, The Church of Our Lady of Dolours, Wadala is a Roman Catholic Church. The statue of the Pieta is the centre of attraction at the Church. The foundation stone of the church was laid on November 1, 1936. The Church was authorized under the Salesians in 1948. From here it spread to other parts of the Mumbai and to other cities in western India. It is located in Matunga East in Mumbai.

Located on Sir J.J. Road, Byculla in Mumbai, Magen David Synagogue was built in 1864. David Sassoon constructed this synagogue. It was built for the growing population of Baghdadi Jews. Constructed in the Victorian style it is regarded as one of the largest synagogues in Asia. Two Jewish schools are also operated under it. Roman catholic churches in Mumbai are under the authority of the Archdiocese of Bombay.

Mount Mary basilica is a 100 year old Church in Bandra in Mumbai. It is famous for the celebration of the birthday of the blessed Mary during the month of September. The Church stands atop a hill and overlooks the Ocean. The statue at the Church is from the 16th century and the architecture of the Church is of semi-Gothic style.

Explore more about Lifestyle of Mumbai