Chor Bazaar, literally meaning thieves market, is unlike any other shopping destination of Mumbai. Its unlike any other shopping place because there is no other place in entire country, let alone Mumbai, which sells such huge number of second hand products at unbelievable bargain rates under one roof.
Chor Bazaar in Mumbai is indeed nothing short of utopian paradise for bargain shoppers. On a lighter note, people visiting Chor Bazaar for the very first time do not worry at all about police raid. Since almost all products sold here are second hand products and not stolen products. 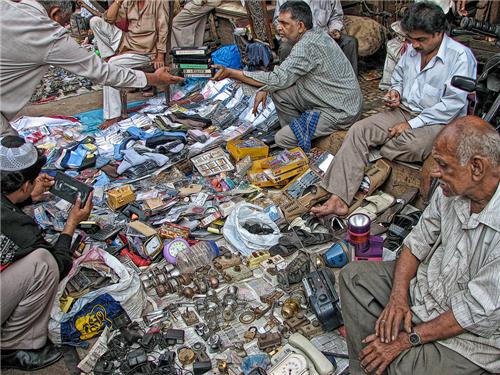 Things to Do in Chor Bazaar

Yes. Apart from shopping there is a lot you can in Chor Bazaar. As matter of a fact, a mere walk through narrow lanes of Chor Bazaar is an absorbing experience.
Thousands of people choked in the narrow lanes – hustling & bustling each other – barrage of stalls and surrounding Islamic architecture will make you feel that you’re not in Mumbai but in a different world altogether.

As for landmark places, you can visit the famous Gol Deoul, the circular Shiva temple. You can also visit 3 sub-division markets of Chor Bazaar, Null Bazaar, Mini Market and Juma market. Mini market is especially popular for selling posters of old Bollywood films and other vintage items of Bollywood films.

For the people who are looking for some great second hand stuff, Chor Bazaar can be a bliss but the surety of products being bona fide will always be at helm.

Chor Bazaar is located at Mutton Street. The nearest station is Grant Road station, from where one can get innumerable buses and cabs for Chor Bazaar.