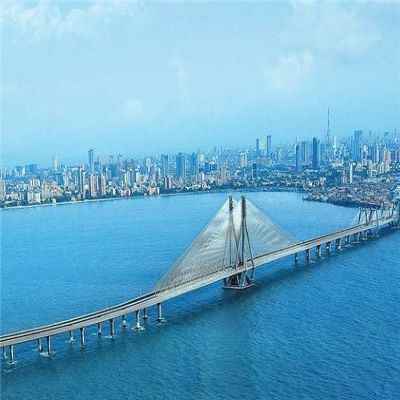 Recently, a Mumbai's famous landmark was illuminated in pink for a whole week as a part of a global initiative to create awareness on breast cancer and do you know the name of that landmark, yeah it was the famous Bandra Mumbai-Worli Sea Link.
Also, officially called as Rajiv Gandhi Sea Link, the Bandra Mumbai-Worli Sea Link is basically a cable-stayed link with pre-stressed concrete-steel bridges on either side that links Worli in South Mumbai with Bandra Mubai in the Western Suburbs of Mumbai.

Bandra, called as 'Wandre' by the locals (Marathi Manush) is a suburb located in the western part of Mumbai. It also has a byname, what we call a sobriquet- "Queen of the Suburbs" and is really popular hub for pubs, high-street stores, shopping centres, restaurants and bars.
It has a long and beautiful seafront with spectacular promenades located along Bandstand, Reclamation and Carter Road.

The name Bandra according to many historians, comes from the Marathi word 'Bandar' means port. The word 'Bhandara' or 'Bandar' which is a word for 'Docks' or 'Wharves' in Indo-Persian language and has evolved from the Portugese 'Bandora'.
Bandra Mumbai has reportedly, one of the largest Catholic populations in Mumbai and thus famous for beautiful and culturally rich churches and lifestyle respectively.

The Mount Mary's basilica stands amongst the others the most because of its history. This chapel of Mount Mary, was built around 1640 by the Portugese. Read more
Later on, if the version of local tradition to be believed, the same basilica was destroyed in 1738 during a Maratha raid. In 1761 much before the rebuilt of Mount Mary, the statue of the virgin was recovered from the sea by fishermen and temporarily installed in St. Andrews for the time being.

With so many other landmarks to look out for, Bandra Mumbai along with restaurants, shopping destinies is a perfect stop for people who love to enjoy life in élan.
Read More Bandra Worli Sea Link Mumbai, Four Seasons Hotel Mumbai,  Top Tourist Places to Visit near Mumbai